I met fellow Twin Cities musician and songwriter Molly Dean this last year and this summer we started singing and playing together in our respective living rooms. It's been a joy to work with her. We both have a passion for harmony and signing together is AWESOME! I'm excited to see where this new collaboration goes and we have some exciting news to share right of the bat; we got an offer to open four dates in Colorado for Dave Simonett and Dave Carrol of Trampled By Turtles. So look out world; here we come! The deets:

Barbara Jean and band to play The Cedar on March 27 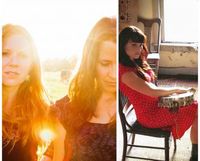 I am thrilled to announce I will be playing with my band at The Cedar Cultural Center on Friday, March 27 with The Ericksons. Both of us released new albums late last year and are excited to share a night together at one of our favorite venues and, no doubt, one of the Twin Cities best listening rooms. Tickets go on sale at noon on Friday.

Review of Darker Than Blue in Southern Minn Scene

Check out Rich Larson's (editor of Southern Minn Scene) review of Darker Than Blue. In it Larson says; "On her sophomore effort Darker Than Blue, Meyers has assembled a backing band worthy of Emmylou Harris or Loretta Lynn. Featuring guitarist/vocalist David Huckfeldt, guitarist Erik Koskinen, bassist James Buckley and drummer Jeremy Hanson, along with a host of special guests, Meyers has the cream of the crop standing behind her, allowing her to present her music in the best possible light. The results are spectacular. Let’s be clear, Barbara Jean is in this company because she belongs there. A true triple threat of instrumentalist, vocalist and songwriter, Meyers’ talent stands as tall as anyone else you’ll hear. She’s a virtuoso on the fiddle, the viola and the banjo. She’s been writing music since she was 13. And somehow amid all of that, she has developed an impossibly beautiful voice."

The new video for "Wishing Well" by Nate Ryan was included at the top of the Top 10 Must-See List by City Pages this week.

Thank you to Northern Community Radio in Minnesota for selecting Darker Than Blue as your album of the week! It's an honor!